See glimpses of ancient worlds and explore the evolutionary history of plants on our campus.

Earth’s terrestrial ecosystems have taken some 480 million years to evolve from the first plants that covered the Earth’s bare rock surfaces to the diversity of trees and flowers that we see and depend on today. Take an ‘Evolution Walk’ around our campus that will guide you through the evolutionary history of plants using the exceptional botanical collections of the University of Exeter. Simply follow the map below, looking out for the green marker posts (examples below).

This guide contains beautiful illustrations of ancient worlds by scientific illustrator Charlotte Gurr along with evolutionary history by Dr Claire Belcher. Start the walk by finding Reed Hall, marked on campus maps and then follow the route below. The walk is just under 500m long and unfortunately is not easily accessible to most wheelchair users or push chairs. During winter months the walk can be muddy particularly at marker 5. The flower walk section is best viewed in spring or summer.

You can also download a PDF of the walk here.

Windows to an Ancient World 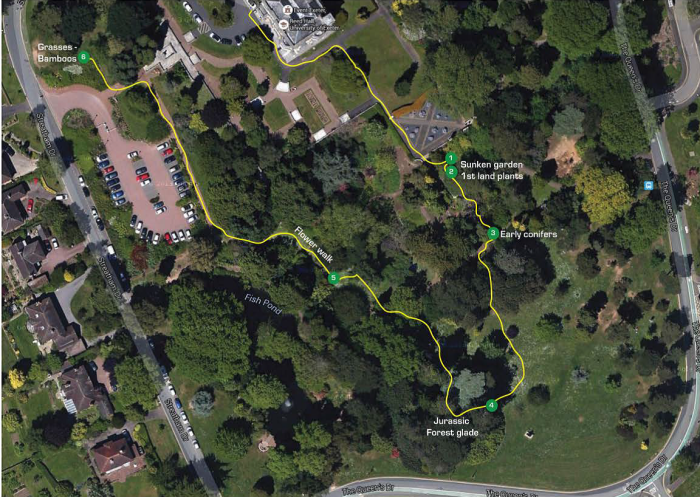 The Invasion of the Land – the first land plants

The first plants appeared on the land surface between 480 and 420 million years ago.

They colonised Earth’s bare rock surfaces and as they did the plant acids they contained began to weather the rock surfaces forming the first thin soils.

These plants were similar to mosses and liverworts that grow today, just like the mosses here int he sunken garden at Exeter.

The oldest fossil land plant is called Cooksonia and was found in County Tipperary in Ireland.

Cooksonia (shown in sketch above) was a small, simple branched plant topped with sporangia (the reproductive spore holding parts of the plant) at the end of each tip.

Cooksonia inhabited damp environments, just like this moss and was 6.5cm tall. 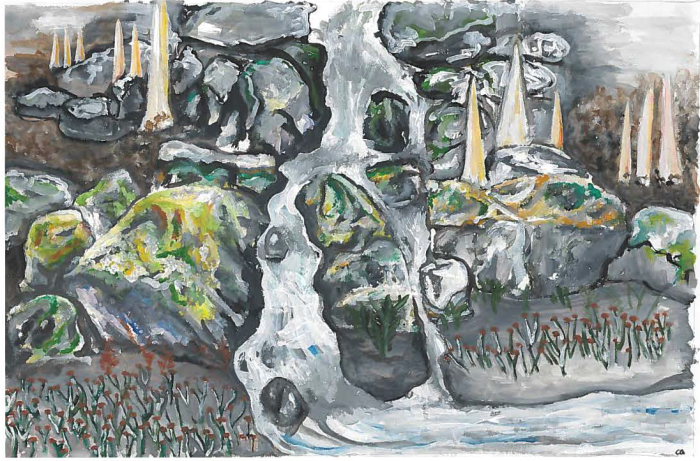 Leaves and the Greening of Earth

Between 395-300 million years ago land plants evolved from tiny plants to the vegetation that included ferns and trees. The Greening of the Earth changed the face of the planet and its atmosphere forever. During photosynthesis and due to weathering of rocks the early land plants took Carbon Dioxide out of the atmosphere. Their effect on the planet was so powerful that by the time the first leafy plants and trees evolved Carbon Dioxide levels were 15 times lower than before plants existed on the land.

Leaves, like those of the ferns you can see at this post in the sunken garden, make wonderful gas capture and solar panels. Plants use leaves to make food from Carbon Dioxide and sunlight and were needed in the new lower Carbon Dioxide atmosphere.

The early trees that grew at this time were unlike and that we see today. In fact they were giant clubmoss trees;  clubmoss today is just a few cms tall! Other important plants that evolved at this early time were ferns and horsetails, which still exist today.

Rise of the Seed Plants

The Earth’s continents changed position between the period 300-230 million years ago. Throughout much of this time all of Earth’s continents were stuck together in a super continent called Pangea. This altered Earth’s climate, forming a drier world.

The mosses, ferns and club moss trees that existed before all used spores to reproduce. 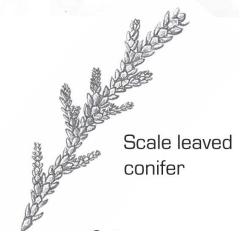 Spores need to have large amounts of water, so they didn’t suit the new dry climate. Plants evolved new strategies to cope. They developed seeds, which provide all the protection and nutrients that a developing plant embryo needs in a single neat parcel providing protection from drought.

Several plant groups that still exist evolved at this time including Ginkgo and conifers with scale leaves, like those that you can see on the conifers at this post.

Jurassic Park – Rise of the Conifers

Between 230-145 million years ago in the Late Triassic and Jurassic Earth’s climate became warmer and wetter. The tropical zone expanded and there was no ice at the North or South Poles.

6 families of conifers evolved in the Late Triassic and diversified throughout the Jurassic that still have a widespread distribution (below).

At this time conifers with many different leaf types and arrangements evolved. You can see several types of conifers in the forest glade at Marker Post 4.

A World with Flowers

Flowering plants first evolved in the tropics but they soon spread to dominate virtually all areas of the planet. The first flowering plants were small weedy plants making it hard to imagine how these invaded and out-competed tall conifer trees.  One suggestion is that they altered the flammability of forests such that wildfires ate their way into conifer forests allowing the new weedy plants to invade the burned patches. Grasses and the Spread of Grasslands

Grasses are part of the flowering plant family. There are 11,000 species and grasses form the most important crop plants on the planet, feeding over 3 billion people per day.

The earliest grasses are from the Bamboo family, you can see examples of Bamboo at Marker Post 6. The Bamboo family evolved around 70 million years ago in the undergrowth of Cretaceous tropical forests.

Grasses today are diverse, they occur in small herb like forms (like your lawn) through to tree sized bamboos. They inhabit all major landmasses and all climate zones from tropical rainforests to deserts and the arctic.

However, it wasn’t until between 20 and 8 million years ago in the Miocene period, some 400 million years after the first plants colonised the land that the first grasslands spread across the planet. 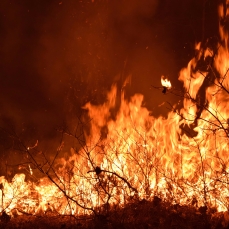 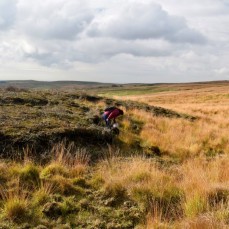 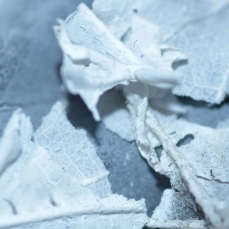 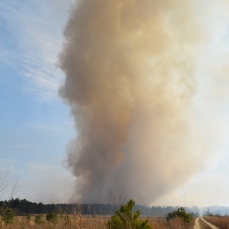 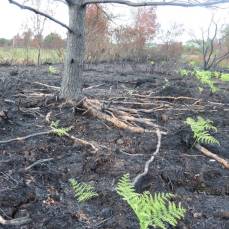 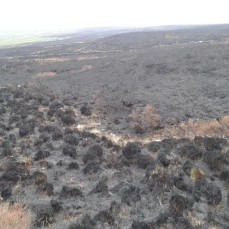 The wildFIRE Lab is part of the Global Systems Institute at the University of Exeter.

We are also part of Geography in the College of Life and Environmental Science.